How to Sweep Like an Expert, with Scott McVeigh

If you need help on your next Zwift group ride, look for someone like Scott McVeigh.

He has nearly five years of experience as a sweeper, offering a wheel and some company to people who drop off the back of group rides. McVeigh fills this role for the TGIF Group Ride, the ZSUN Sunday Social Ride, and the ZSUN Back to Basics Ride. He also takes a turn as a leader for the ZSUN Base Builder Ride on Saturdays.

McVeigh, a professional photo retoucher who lives in New Jersey, joined Zwift in the spring of 2015. He had been cycling for a few years already, but riding on an indoor trainer just didn’t appeal to him.

Then a good friend sold him a used Wahoo Kickr at a bargain price, saying, “I have a feeling this is going to change your life.”

“He had no idea,” says McVeigh.

With a smart trainer, McVeigh could now join the beta test of Zwift. He soon realized that what he liked most was riding with others.

He started showing up to a “Sub 2” group ride led by Tim McCarthy, which tried to keep a pace below 2 watts per kilogram. They needed a sweeper to help keep the group together, because there were a lot of beginner riders. So McVeigh volunteered. As he got stronger, McVeigh joined the TGIF Group Ride at a slightly faster pace. After a few weeks, he offered to sweep for them, too.

“I like to ride and help other people,” McVeigh says. “I always hated when I was riding with groups in real life, and I would struggle to hang with them because they were stronger than me. I was like, ‘I wish somebody would just ride with me.’”

He eventually got fast enough to keep up with those groups, thanks to all the cycling he was doing. With the help of Zwift, McVeigh went from riding 1,500 miles per year to 10,000. And he lost close to 50 pounds in less than two years. 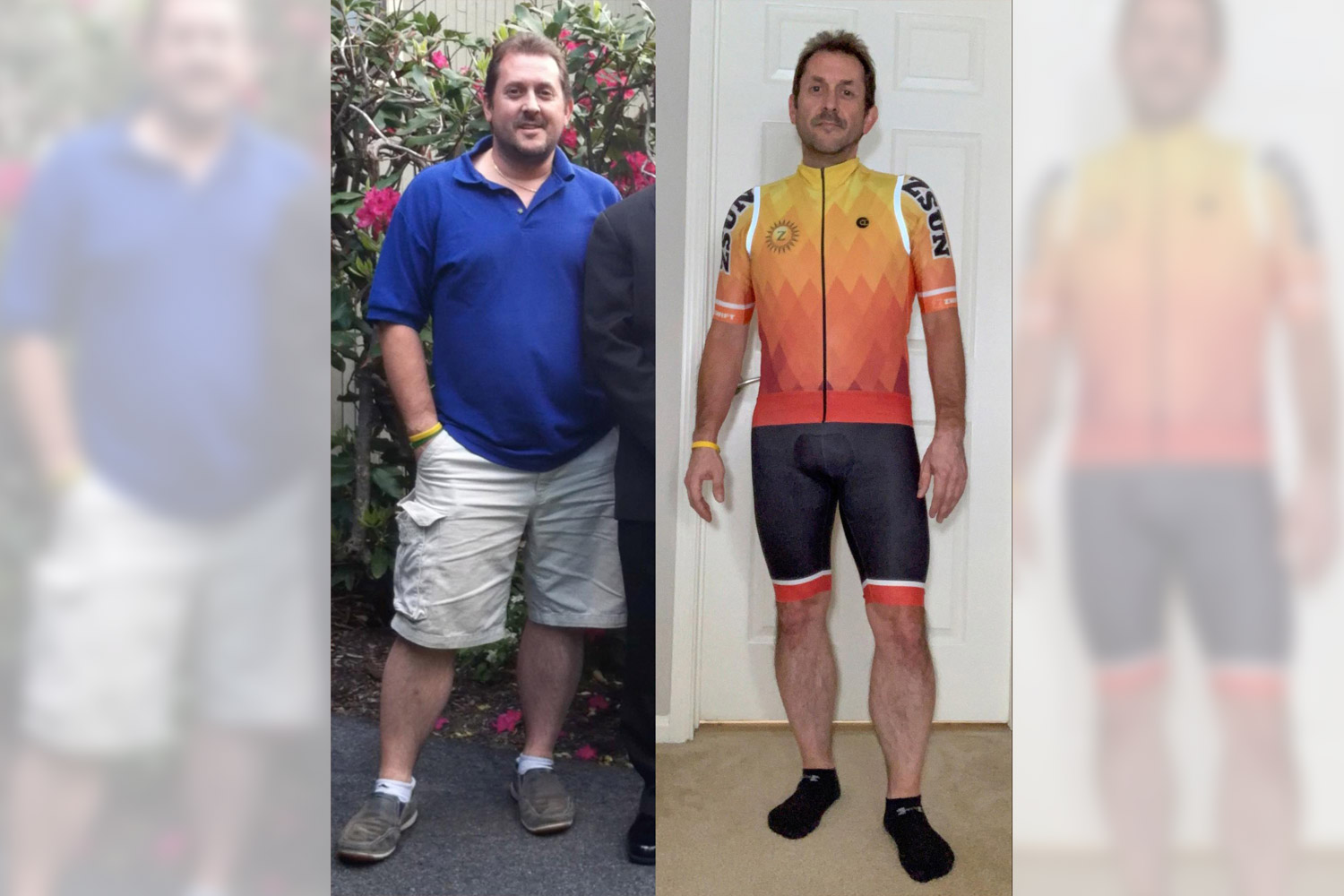 Have a similar appetite for riding and helping others? Here are some tips for how to be a good sweeper, based on McVeigh’s advice!

What Do Sweepers Do?

There are a few different types of sweepers. Depending on the ride, they might play the following roles:

Whether they’re beginner Zwifters who are still learning or veterans with technical problems, for McVeigh, it’s satisfying to bring stragglers back to the bunch!

“You can’t just say, ‘I’m going to sweep and just not talk to anybody,’” McVeigh says. “That won’t work well at all.”

Effective sweepers usually do a lot of talking, whether they’re volunteering to sweep, asking questions, or encouraging riders. Try to let dropped riders know what to expect, then cheer them on.

“When I’m sweeping, I’m typing or talking to them,” he says. “I might be trying to encourage them to stay with me – ‘Keep at it! You’re almost there!’”

You should be able to type and ride steady at the same time. McVeigh’s trick for this is a piece of plywood clamped into a bike stand. He uses it as a platform for a wireless keyboard and mouse, swiveling it in front of him to type and then pushing it out of the way.

You also can send messages using your mobile device with Zwift Companion. Communication might be easier with a voice chat application like Discord, but not all groups or riders use it. 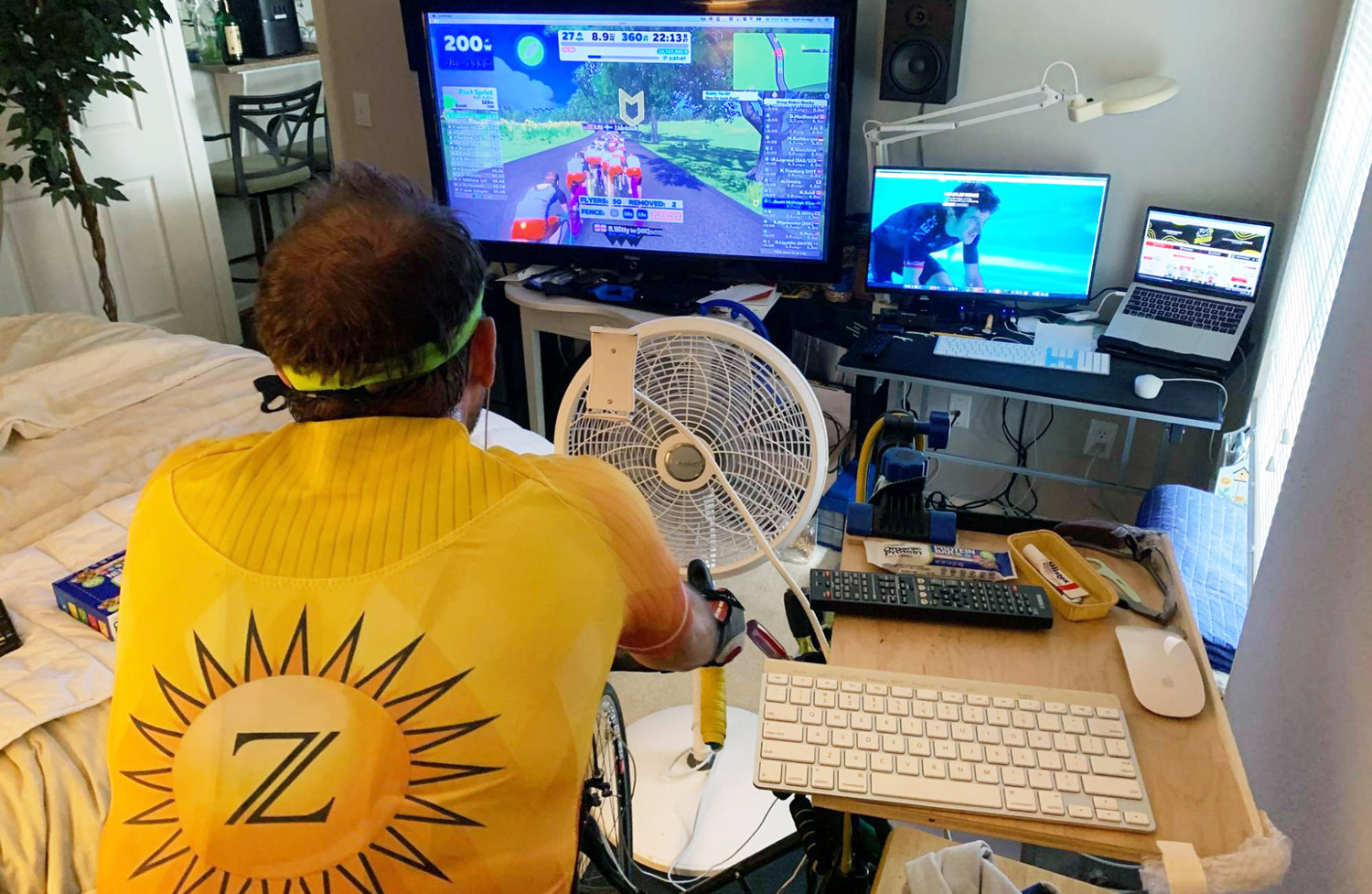 “If the watts per kilogram you can hold is 3.2, you should not be sweeping a 3.2 ride,” McVeigh says.

Pick a ride at a comfortable pace for you. If you don’t know your limits, you can test them by dropping back and catching up, noticing how hard and how long you have to push. Make sure to tell any sweepers that you don’t need help!

If you’re new to sweeping, try volunteering with a group that already has a sweeper. One regular sweeper will have an official red beacon, but often there are others waiting to help. Follow their example.

“Let the sweeper and leader know you’re willing to help,” says McVeigh. “I like them to put ‘SWEEP’ in their name if they can.”

The larger the team of sweepers, the more people can help share the load!

“Sometimes, (sweepers) say, ‘I need a little help… it’s going to take a couple more bodies,’ and then we all drop back and there’s six of us,” he says. “We might be full-on sprinting at the front, and that will get the group back quicker.”

Some leaders slow the whole group down if riders are dropped, and others don’t. Check with your ride leader to make sure.

McVeigh rides near the back of the group, but not all the way back, to stay securely in the draft.

Watch the rider list on the right of your screen and in Zwift Companion. If you’re ready to sweep, ask if any riders who are behind need help. Keep in mind that in a large group, you may not be able to see riders behind you. Zwift will limit the riders it shows you to the closest ones.

“I try to explain to people, ‘I can’t see where you’re at, so you need to type and tell me where,’” McVeigh says.

Lower your power enough to start moving backward. Then speed up again as the riders get close.

You Can’t Help Everyone

Sometimes dropped riders don’t want help, don’t need it, or aren’t strong enough to use it. Some are too far away. You’ll get a feel for who you can help as you go.

Ask if a dropped rider can bump up their power for the time you think it will take to sweep them. Make sure they can go higher than the w/kg of the front group for a minute or two. If they don’t answer and you can see them on your rider list, try to watch their w/kg and see if they look like they can make a strong effort. 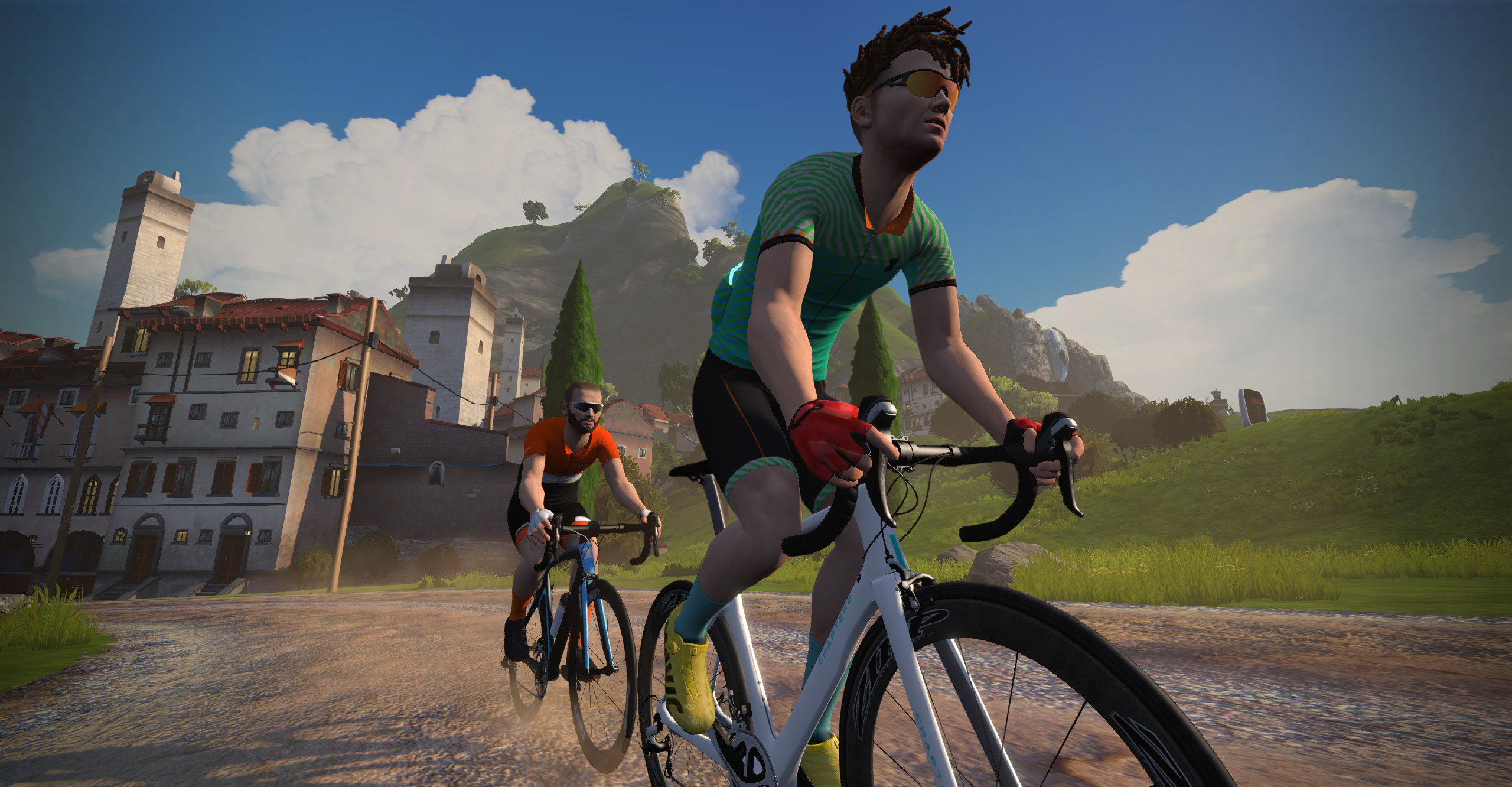 Once you have a rider on your wheel, increase your pace gradually and watch the other rider. Make sure they stay right behind you and can close any gaps that you open.

“I try to increase very slowly, and then as soon as I can tell that they’re starting to fade, I let up until the gap closes,” McVeigh says. “I have to kind of find their max.”

Get A Bird’s Eye View

McVeigh has a favorite trick for sweeping – use the overhead camera view by pressing “9” on the keyboard. This lets you see the exact distance between their front tire and your rear tire. The closer they get, the faster they can go for the same effort. If you tell them how to switch to the same view, they can see if they’re getting the most out of the draft. (Press “1” to go back to the default camera.)

"This is also handy in team time trial races," he says.

When more than one person needs help, move further back and work your way forward, sweeping them up like a broom. This saves time and energy compared to helping one at a time.

“If there are seven people 15 seconds behind me, I can skip four or five people in between and pull those seven up with me,” McVeigh says. “Then we bring 12 people back.”

If there’s a group behind you that looks like they can come back, join them and sweep up any riders in between as you move forward. Before you reach them, encourage them to pick up speed and latch on. Make sure they’re with you if they can keep up, and then keep pulling.

Once you’re back in the group, if the struggling riders are new to Zwift or to group rides, you can offer some tips. If they dropped on flat ground or a descent, they might not be staying in the draft well. Someone having trouble with hills might want to push to the front at the bottom of climbs.

Then it’s time to do it all again!