The first Zwift Classics Men’s race was a bumpy ride in New York, where both sprinters and attackers showed their strength.

The men in the Apple Lap raced 4 laps of the Park Perimeter course in New York’s Central Park, for a total of 38 kilometers. While there are no big climbs, Harlem Hill is enough to hurt the legs of the riders racing this rolling course. It’s 700 meters long with an average 4.5 percent grade.

Each 9.8-kilometer lap ends on top of another short climb. Cat’s Paw Hill is a 300-meter climb with an average 6% grade. Racers approach it from a slight descent, gathering speed just before the sharp, uphill finish.

The Apple Lap featured seventeen participating teams, including 3 teams of professional cyclists, with up to 5 men each.

The first attack of the day came just 4 kilometers into the race, with Matt Gardiner (Indoor Specialist) and Ollie Jones (Turbo Squad) testing the legs of their competitors early. A few other racers tried their luck, and while they didn’t get far, some riders dropped off the back of the peloton each time. Mike Cuming (Madison Genesis) attacked on Harlem Hill in the third lap, got a gap of several seconds, and held it. When the bunch got close to catching him, Phillipp Diegner (Canyon ZCC) and Ryan Larson (Indoor Specialist) jumped out to join him, and the breakaway started extending their lead. But it wasn’t long before they were caught.

Francois Coppex (Team eXperimental) attacked on Harlem Hill with a lightweight feather PowerUp on the final lap, but he was caught shortly afterward. His attack did shed additional riders, and now the group was down from 71 at the start to 42.

The battle for the sprint classification also shook things up in the peloton. The racers were awarded points based on their position across the sprint banner each lap.

Bird, Jones, and Lionel Vujasin (Canyon ZCC) fought fiercely at each of the intermediate sprints. Vujasin won the first sprint. On the second sprint, he took a tip from London International sprint points winner Tanja Erath and used the ghost PowerUp to sneak away. Bird grabbed the last two sprints, using an undraftable “breakaway burrito” PowerUp to keep riders off his wheel for the final one. But Vujasin was close behind, and the Canyon ZCC rider earned enough total points to win the competition.

Immediately after the final intermediate sprint, Ian Bibby (Madison Genesis) powered off the front. He had tested this with a short attack after the sprint banner on an earlier lap, and now he was going for the win. Racers were tired from chasing the sprint and caught off-guard.

Dan Bigham (Ribble Pro Cycling) decided this was a move to follow. He made the jump to bridge Bibby, a fellow professional cyclist. Then he rode right past! As an individual pursuit rider on the track, Bigham excels at these efforts. With less than 1 kilometer to go, Bibby kept fighting, gaining time on the peloton but struggling to close the gap to the leader.

By the base of the finishing hill, Bigham was still 7 seconds ahead of Bibby and more than 20 seconds ahead of the bunch. He gave one last dig on the climb and took the provisional win for Ribble Pro Cycling! Bibby was hot on his heels for second place, staying just ahead of the charging sprinters behind. 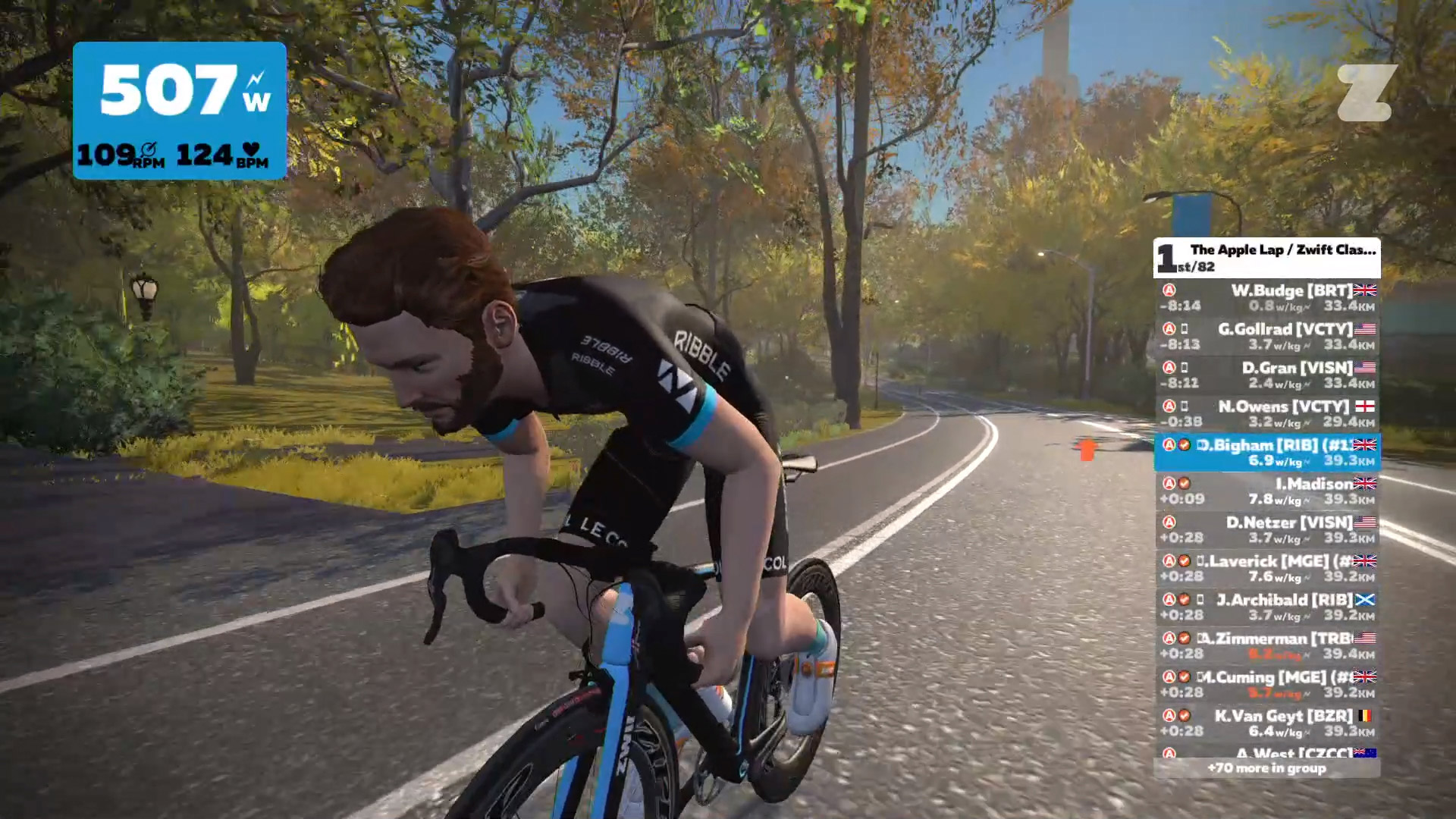 Bigham said his invisibility PowerUp helped him decide to try a sneak attack for the finish.

“I thought Bibby would go long again as he’s done it a few times in the KISS Super League. I decided to go over the top if he went,” he said. “Without an aero PowerUp there’s no point leaving it to a sprint, and my peak power isn’t where it was a few months ago at the end of the track season.”

He said he went into the race with some built-up frustration from the National Road Series Beaumont Trophy over the weekend, where he missed out on a win from a breakaway.

“I did what I wanted to do there but in this race,” Bigham said.

Vujasin said he targeted the intermediate sprints because he doesn’t feel comfortable on the final run-in to the finish on this route. He left that to power sprinters on the team like James Phillips, who took 3rd place.

“I was hoping to secure the sprint competition in the third lap so I could help the guys later,” Vujasin said, “but I had to contest it in lap 4 as well which totally destroyed me. After the last sprint it was impossible for me to recover in time for the final sprint.”

Gardiner, one of the early attackers, said the pace was high in the first lap but seemed to settle down for a while after that. By the time Bibby and Bigham broke away, he decided to sit close to the front of the group and hope that they could bring it back. In the end, the Indoor Specialist rider finished in 5th place, coming second in the bunch sprint.

“The caliber of racers in the Classics is pretty staggering, and to get to line up against them is incredible and just so much fun,” he said. “It’s impossible to find a race this hard on any given day on Zwift.” 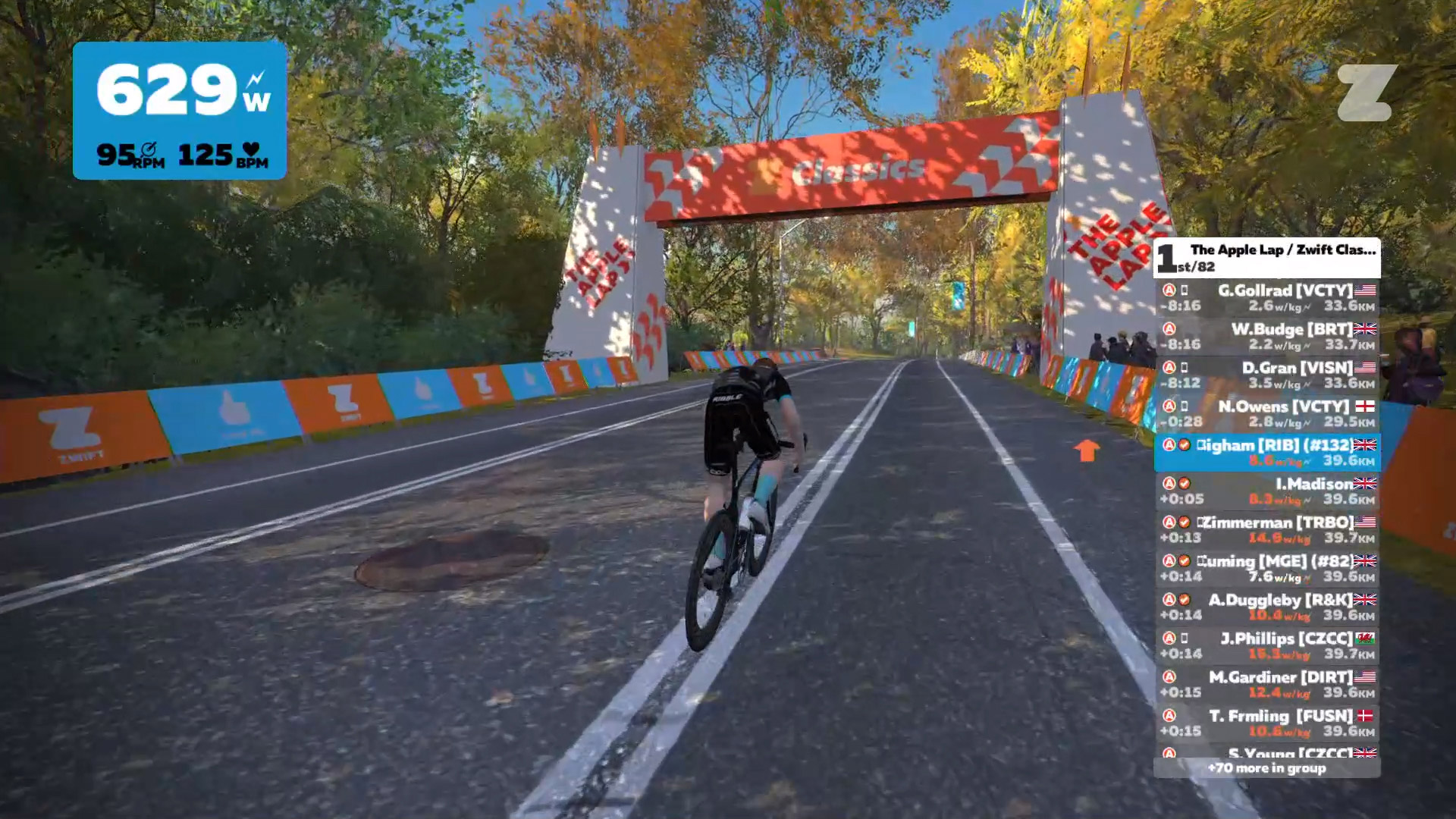