The ladies raced Zwift's new Yorkshire course while pro riders converged on Yorkshire outdoors for the 2019 UCI Road World Championships. In the end, two women from the same team had the power, punch, and team support to take the win in commanding fashion.

The Yorkshire Gran Prix women faced two challenging laps of the 2019 UCI Worlds Harrogate Circuit, for a total of about 28 kilometers (17.4 miles).

As a GPS-accurate replica of the finishing circuit for this year's UCI Road World Championships, Yorkshire is the newest course on Zwift. The course is rarely flat, requiring racers to pay close attention and dig hard if they want to stay with the front pack. The longest climb on the circuit is the timed King of the Mountains (KOM) section, which is 1.2 kilometers (.75 miles) long, averaging 5.5 percent grade. Each lap also includes a slightly uphill sprint segment, and the race ends with a tough uphill finish in downtown Harrogate.

The race was hard and fast from the beginning, and the 52 starting riders flew up the long, straight Harlow Hill climb which begins just after the start banner.

The real fireworks began on the first KOM classification, as riders fought to earn points according to their position across each banner at the top of the climb. Last month's Rund um Innsbruck winner Louise Houbak (Innovation) attacked hard and came over the top with a 3-second gap on the chasing group of 8 riders. That group reeled Houbak in, but only in time for her teammate and Zwift Swedish National Champion Cecilia Hansen to take first on the sprint section. 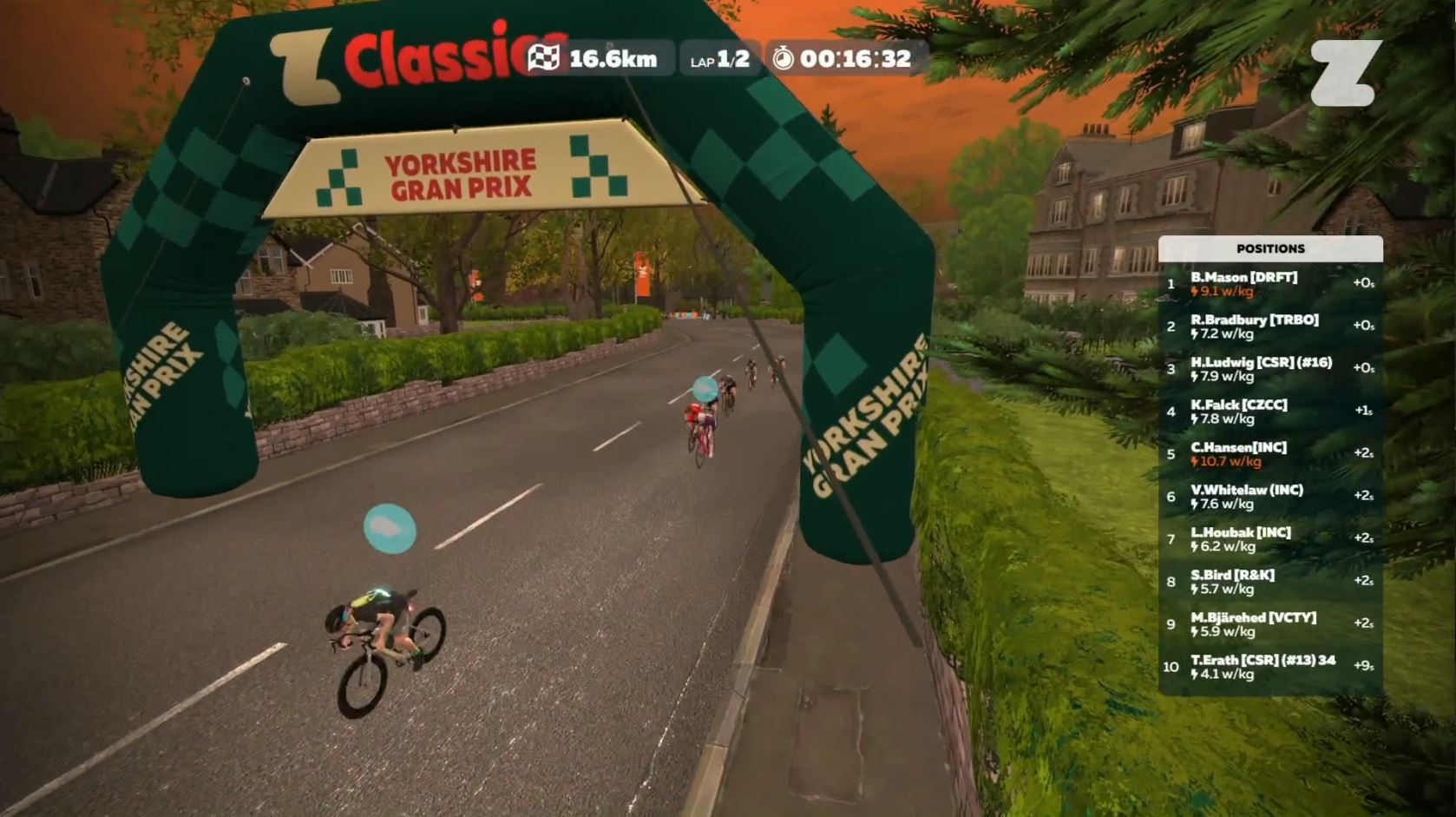 As the front group of 9 completed their first lap, they were caught by a chasing group of approximately 10 riders. With riders able to "hide" and recover in the larger group, we began to see some strong attacks. But no breakaways were able to stick with such a large group chasing from behind!

Once again, the fireworks began soon after the riders hit the KOM section. Tanja Erath (Canyon//SRAM) started by pushing the pace at the front, then her teammate Hannah Ludwig attacked and gapped most of the group.

But team Innovation had other plans! Cecilia Hansen attacked hard, quickly catching then passing Ludwig. Then her teammate Houbak attacked as well, joining Ludwig a few seconds ahead of the hard-charging pack. The two Innovation teammates worked together, building a 6-second gap on the pursuers as they crossed the KOM banner. Hansen let Houbak cross the banner first, giving her maximum KOM points so she could take the win in that classification. 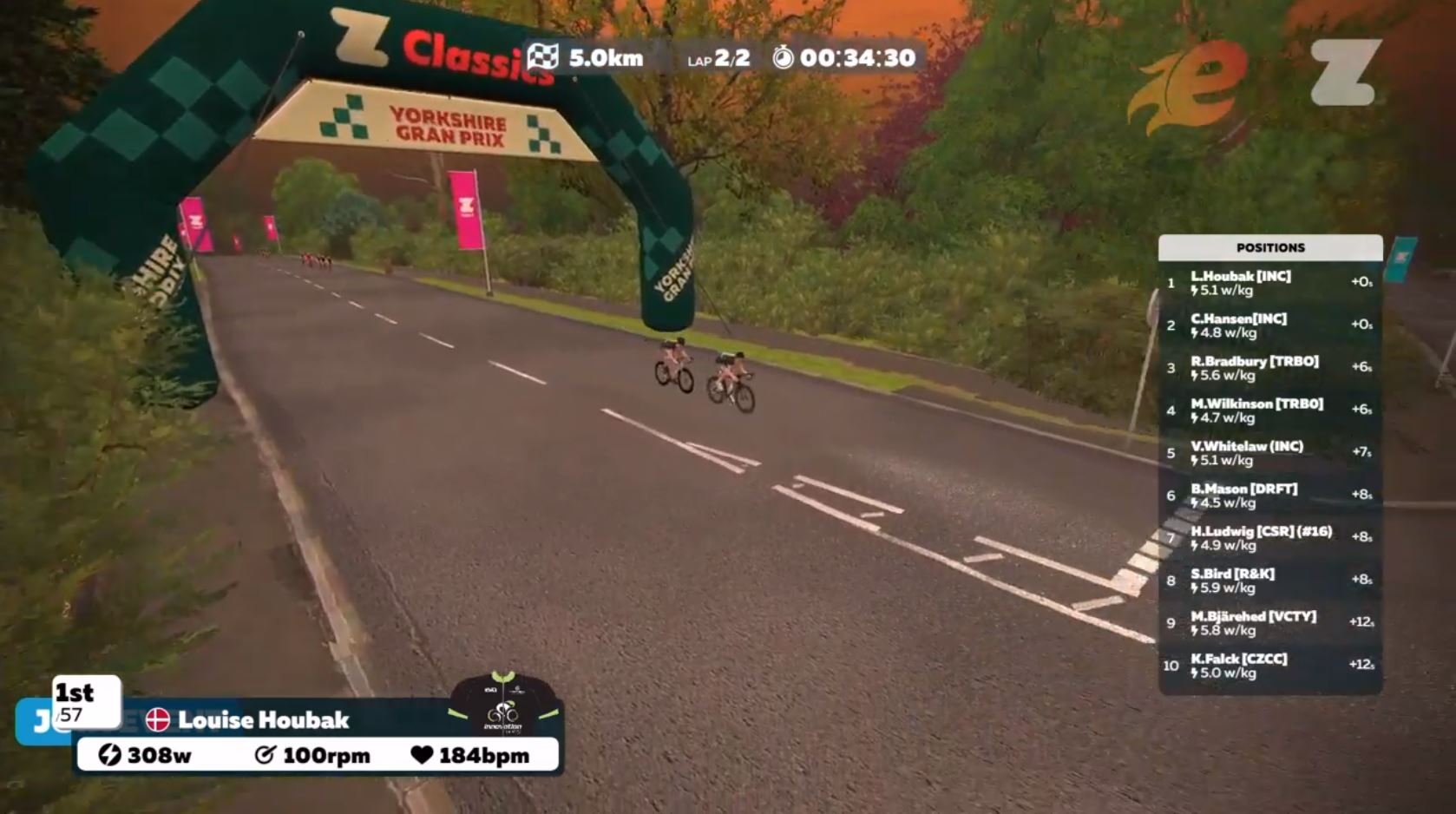 With a significant gap on their pursuers and 5 kilometers to go, Hansen and Houbak pushed the pace, extending their gap to 18 seconds as they passed through the sprint banner with less than 3 kilometers to go. Team Innovation continued to work together very well, with Hansen crossing the sprint line first, giving her maximum sprint points and the win in that classification. 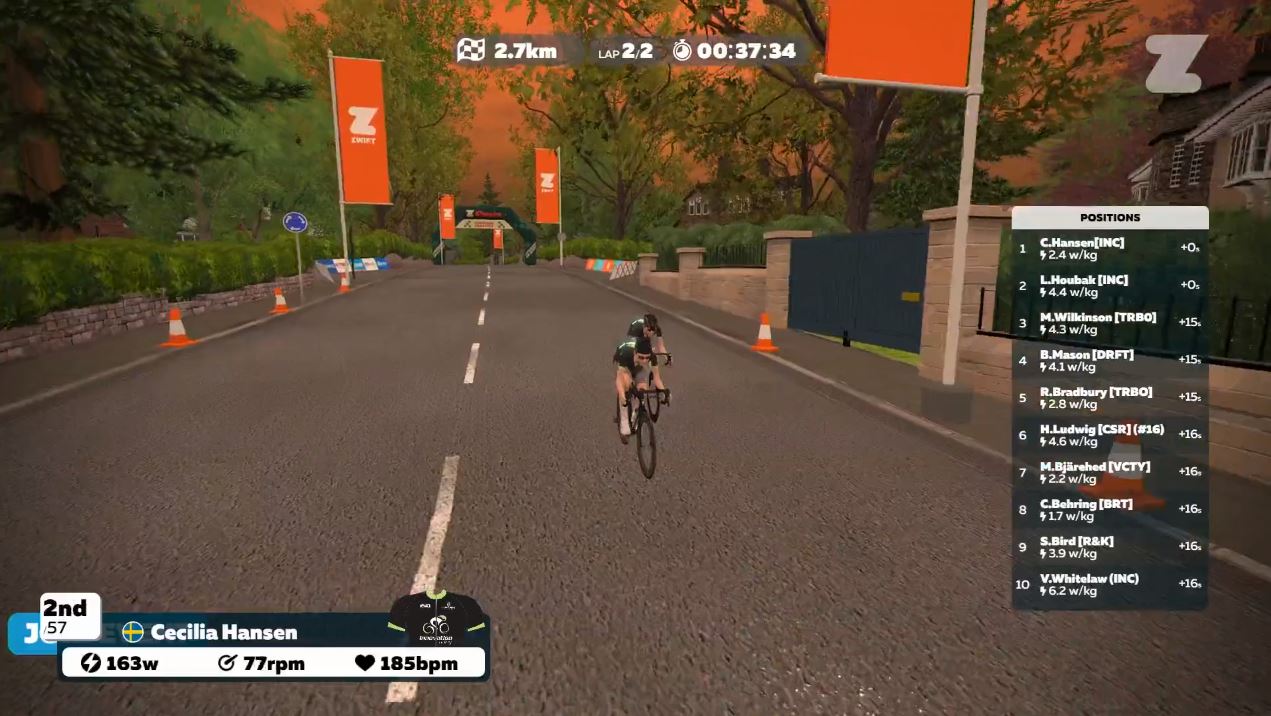 With 1 kilometer left it was clear that the Innovation riders would not be caught, as the chasers were now 22 seconds behind. As the two riders hit the short climb near the finish, both fired off feather powerups, giving them a slight weight reduction as they flew up the finishing straight.

With 100 meters left to go, Hansen unleashed a strong sprint, gapping Houbak by 2 seconds and taking the win! In the chasing group, Mary Wilkinson (TURBO) and Britt Mason (DRAFT) battled for the final podium spot, with Wilkinson just edging Mason out in a photo finish. 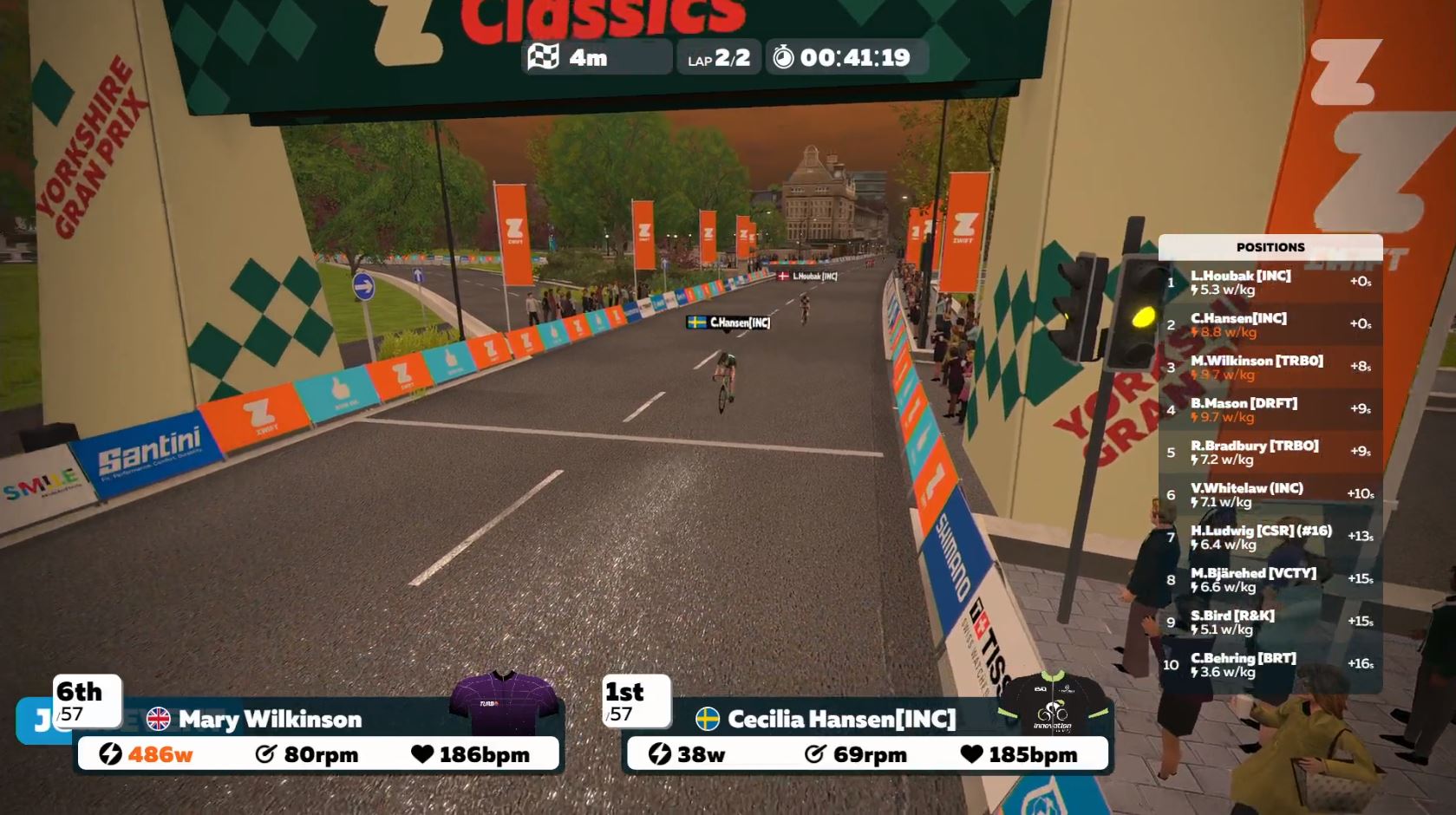 Note: Results are provisional and will be finalized after performance verification takes place.
See Full Results

With the benefit of hindsight, third-place finisher Mary Wilkinson may have done things a little differently. "I had an aero [powerup] and was torn between using it to close the gap or holding it to the end," she said. "Decided on the latter but maybe I should have risked it."

Mary knew that Hansen and Houbak were strong riders, but the group just didn't work together well enough to catch the final Innovation breakaway. "They are both exceptionally powerful riders, so when they got the gap I knew it would be hard to get back. We actually got to within 5 seconds but then the group seemed to sit up and that was it, they were gone."

Team Innovation's dominant win was powered by Hansen and Houbak's cycling talent, but it was also the result of preparation and planning. The team had decided that anyone who felt good would attack on the final KOM, and that's exactly what Hansen and Houbak did.

"I’m pleased we managed to stick to the plan and finish the hard work," said Houbak. "It's always great to race these fun races with my teammates, and being on Discord 'across the World' makes it just so much more fun."

"We had both ridden and raced the course together before tonight's race," said Hansen. "We were (healthy) nervous at the start, many respected names lined up. Fresh legs, tactics and a courageous attack brought us home."