At the end of a busy work week, relax and unwind with friendly company in the TGIF Group Ride.

In the mood for more excitement? They also play a game that can help you get better at pack riding on Zwift.

TGIF (Thank God/Goodness It’s Friday) is one of Zwift’s oldest running group rides. Many of its regulars have been around for years, but the ride’s steady pace also attracts a lot of newcomers. People from all time zones in the Americas can catch an evening ride, along with some riders from Australia and Asia doing their morning workout.

Ride leader Eric Grant tells people that on Friday evenings, “I join hundreds of people riding on their bikes in living room/basements/pain caves around the world while partaking in a nice beverage/beer and enjoying the great company of the TGIF social ride.” 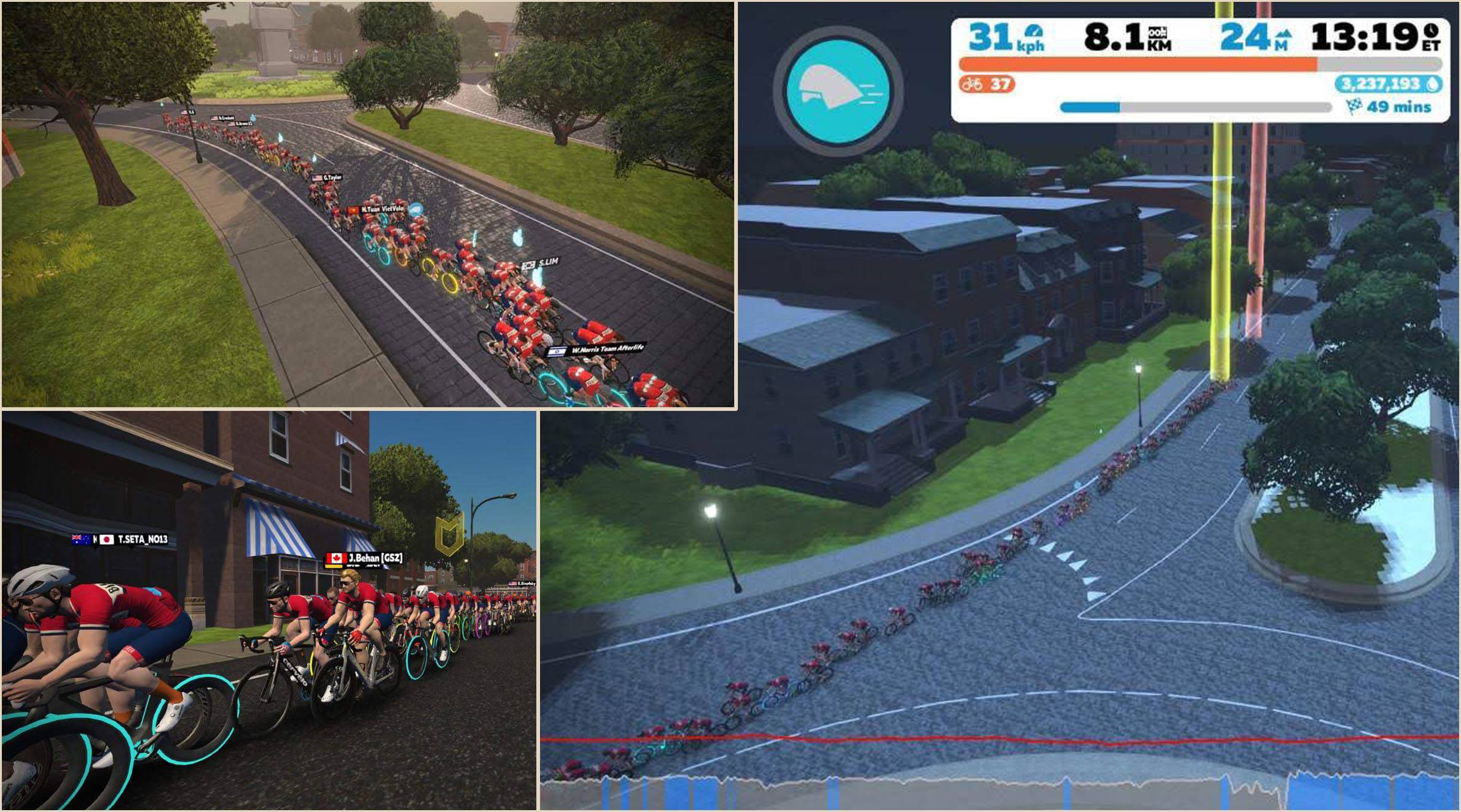 TGIF is known for its steady pace and fun, social atmosphere. The ride leader controls his trainer with ERG mode, holding a consistent 2 w/kg no matter the course. The ride also uses a creative “points game” to encourage people to stay together.

“It's always been a challenge to keep a large group together without people trying to ride their own pace, which often bothers others trying to enjoy the group ride,” says leader Eric Grant. “To encourage riders to stick with the yellow beacon, Wes Salmon came up with the idea to give points to the riders closest to the yellow beacon at specific times throughout the ride.”

Every 10 minutes, the leader takes a screenshot that includes his “nearby riders” list. Riders are awarded points depending on how close their name is to the leader’s name in that list. It takes a mix of skill and luck. Riders who make the screenshot with either orange (high) w/kg numbers or 0 w/kg get bonus points. Eager sprinters can have their fun, but they need to stay with the leader if they want points! Later on, Eric uses a spreadsheet to calculate the week’s “winners” and posts them to the TGIF Facebook group. There’s an ongoing quarterly and yearly competition, but the only thing at stake is bragging rights.

TGIF riders make good use of the voice chatting app Discord, in part because Eric gives a live countdown to each points screenshot. Eric recommends that people join the group’s channel to get the full experience.

“There is good social chat using the in-game messaging, but the Discord channel is really what makes our ride social,” Eric says. Some of the riders have gotten to know each other well and even meet up for rides in person. There’s a group of regulars in Seattle, another group in the northeastern U.S., and some that came out to Phil’s Cookie Fondo in Malibu.

After 63 minutes - enough time for the leader to share the results of the last screenshot - the “after party” begins. Depending on the route, it’s either built into the ride or takes place right after it ends. Usually, partiers head for the closest significant climb, but sometimes the group will do sprint lead-outs, one-lap races, or even the new mountain bike trail on Watopia (Repack Ridge).

TGIF was originally created by Chris Ryder and William Kwan back in the fall of 2015.  They wanted to create a ride for socializing at a recovery ride pace at the end of a long week. It started as the “TGIF Beer Ride,” as a nod to real-life relaxed “beer rides” where a cycling club stops at a bar or pub. Here’s Eric’s take on the history of the ride:

“At that time in Zwift, most of the group rides were more performance-focused, and TGIF was one of the first 2 w/kg or lower targeted rides. This was long before events and it was just a bunch of riders meeting at the start/finish line. At first we just tried to average 2 w/kg, but many of us would get dropped on the climb and it was hard to find the leader without a beacon. Chris switched to using ERG mode to lead the ride and this helped hold the group together, and there were very few rides using ERG to control pace at the time.”

“A few months after Chris started leading the ride he had a hockey injury that kept him off the bike, so Wes Salmon, of Zwift HQ fame now, started leading the ride. While Wes was leading, events were added along with the leader beacon, and we were one of the first scheduled events. Wes started the Points Game that we still play which added some excitement to typically calm 2 w/kg ride. Wes wasn't able to lead during the summer, and I took over leading TGIF in August of 2016.” 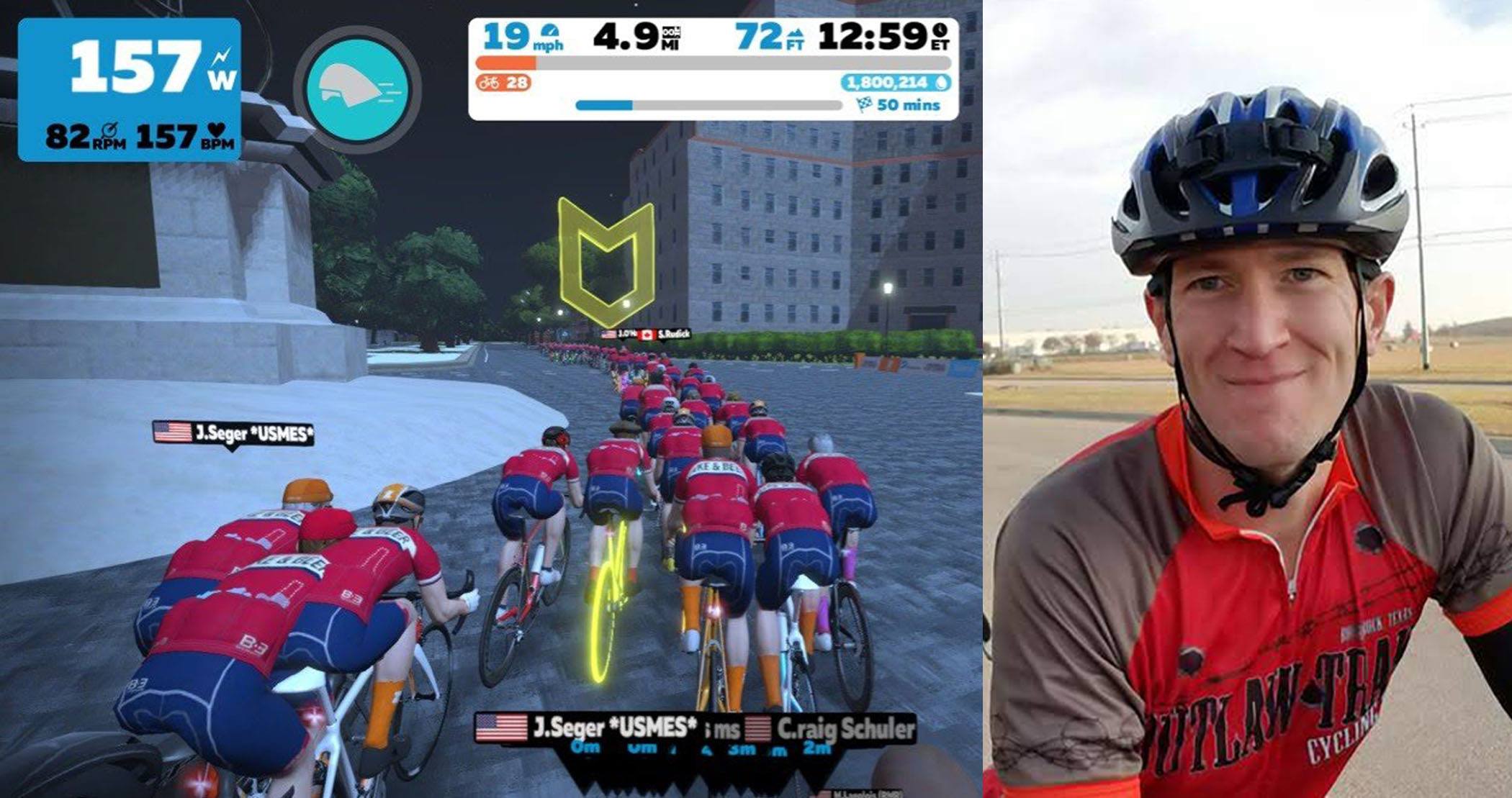 Eric Grant started riding in 2006, to avoid buying gas after Hurricane Katrina. He realized he actually enjoyed it and wanted to ride more for fitness. This is his story:

“I reached my maximum weight in 2011 at 357 lbs, and after having problems fitting in an airplane seat I finally started getting serious about losing weight. Some of that came from watching what I ate but much of it came from cycling. I quickly dropped to 285 lbs, but then I got a new job and relocated to Austin, TX, where I live now. I had problems getting back into a routine that worked for me and I had re-gained some of my weight and was back to 315 until I found Zwift in July of 2015. After a little over 2.5 years on Zwift I was down to 200 lbs, having lost over 150lbs. I now ride almost every day and have maintained my weight for the last 2 years around 200-210lbs, which is a good weight for my height of 6'4".”

“After a year of racing on Zwift, my Zwift friends convinced me to start racing IRL last year.  I'm still working on my first CAT 4 points, but it's amazing to see how far I've come since I started.”

For more information about TGIF, you can join the Facebook group. You’ll see the results of the previous week’s points game and the current standings for the quarter/year. There is also a link in the group description to the ride’s Discord channel.